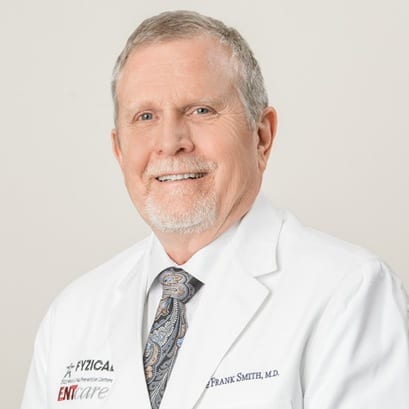 Dr. Smith is a Fellow of the American Rhinologic Society, the American College of Surgeons, the American Academy of Otolaryngology Head and Neck Surgery and is a Certified Physician Executive.

He is a Member of The American College of Physician Executives, the Alabama Society of Otolaryngology Head and Neck Surgery, the American Rhinologic Society, and is a Diplomat for the National Board of Medical Examiners.

Dr Joe Frank Smith founded the Dothan ENT Center in 1991. In 1997, the center merged with Ear, Nose and Throat Associates, also of Dothan, to create what is now known as ENTcare.

Dr. Smith earned the prestigious “Doctor of the Year” award from the Southeast Alabama Medical Center in 1993. Since that time he has served as Clinical Professor of Otolaryngology, Head and Neck Surgery for the University Of Florida College Of Medicine.

He has also served as Chief of Surgery and Chief of the Medical Staff at Southeast Alabama Medical Center. Over the years, he has served as President of the Houston County Medical Society and the Alabama Society of Otolaryngology Head and Neck Surgery.

He now serves as the Surgical Director of Perioperative Services at Flowers Hospital.

Over his career, Dr. Smith has given over 100 professional presentations. In August 1992 he presented “Endoscopic Sinus Surgery for the Treatment of Sinusitis and Surgical Treatment for Obstructive Sleep Apnea,” at the University of Florida Medical Update Conference, in St. Thomas, Virgin Islands.

He presented “Sinusitic Strabismus” in September 2000 to the International Rhinologic Society, the American Rhinologic Society and the Mayo Clinic in Washington, D.C. In April 2012 Dr. Smith presented “Physician Engagement and Alignment” at the 50th Anniversary of the Otolaryngology Department at the University of Florida.

Most recently he presented, “Dyad Quality Centered MEC”, at the national meeting of the American College of Physicians Executives.

Dr Joe Frank Smith has published on his own, or collaboratively, these research articles: Presumed Sinus-Related Strabismus, Head and Neck Melanoma, Branchial Cyst Anomaly in a Newborn and Squamous Cell Carcinoma Arising in a Pilonidal Sinus.

ENTcare is now located exclusively at Flowers Hospital and has two other divisions of care, Physicians Hearing Center and Fyzical Dizziness and Fall Prevention Center.  Dr. Smith believes in patient centered quality focused healthcare where physicians, administrators, nurses and the patient work as a team in medical care.

Dr. Smith and his wife Kristi have been married since 1985 and have raised their two sons in the Dothan area.

They now reside on a farm outside its city limits.

Very good doctor. Dr. Smith is a doctor that cares about his patients, excellent bedside manner, he listens to his patients, he will answer any and all questions, Dr. Smith never makes you feel uncomfortable with any question, he never sugar coats any answer to any question his patients ask him. Just an all around best doctor there is. He really cares for his patients and treats them as if they were apart of his own family. On a scale of 1-10 I rate him a 1,000. He's just awesome.
JAKE SMITH
DOTHAN AL